This may sound rather ironic, but, on the last day of her trip in Korea, Wendy suddenly announced that she wanted western food. We were supposed to meet in Gangnam and we were due to meet in the morning, which then meant I was posed with the challenge of finding a decent breakfast/brunch place that
a) wasn't overpriced (because I'm a cheapo), and
b) served eggs (because she was craving).
(We girls are mystical creatures and we crave randomly. Who was I to deny her requests? :P)

A quick search on the interwebs for "brunch" and "Gangnam" turned up the usual places like Butterfinger Pancakes, Bakersfield, and The Flying Pan Red. I remembered feeling less than impressed the last time I'd gone to Butterfinger and had to wait two hours for a table (staying only because the friends I was with insisted.. Americans.. hah! :P) and then after all that waiting, the food, which was overpriced in my opinion, turned out to be meh -- not great, not bad, but just okay. Bakersfield didn't serve eggs, so that option was out, and as for The Flying Pan Red... I'd never been there before, but if it was anything like The Flying Pan Blue in Itaewon where brunch averages 17,000 won a dish, I had a feeling it just wouldn't sit right with my cheapo morals.

Enter Harris Coffee Park (which incidentally is also number 2 on CNN's 2011 list of "Seoul's best brunch restaurants") and my frugal prayers were answered.

The theme of the place was Australia, given that Harris Park is a place in Australia, and that instantly won brownie points in my mind. It had a nice, modern, chic feeling to it, and made plenty of references to Sydney, where the suburb of Harris Park is located. 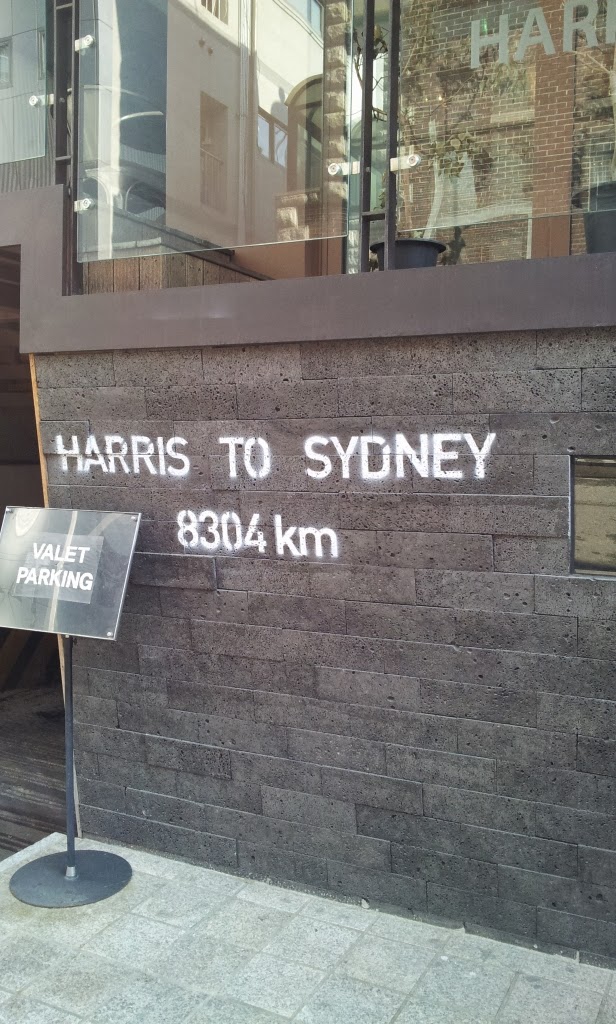 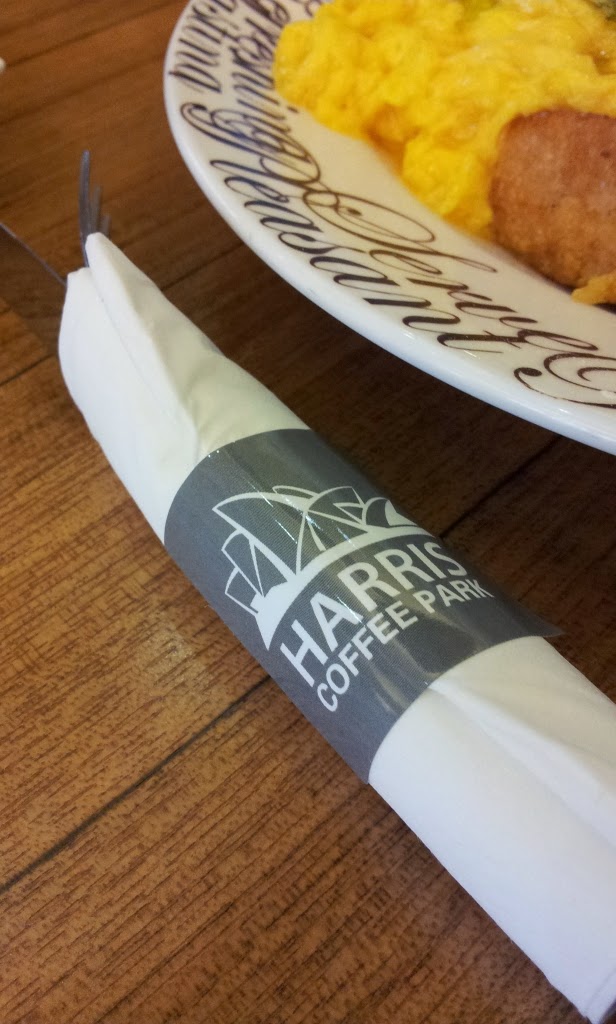 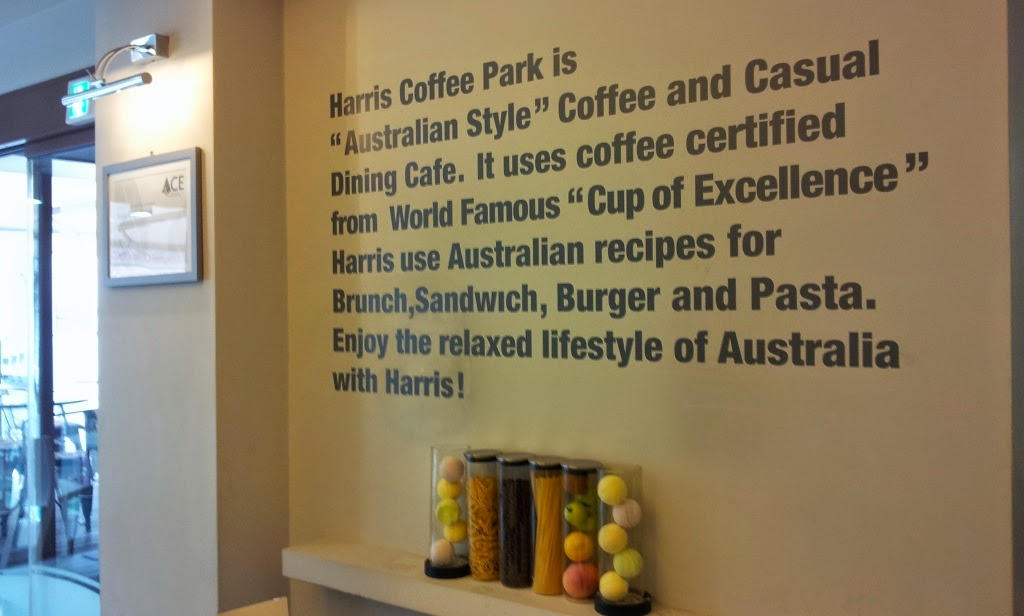 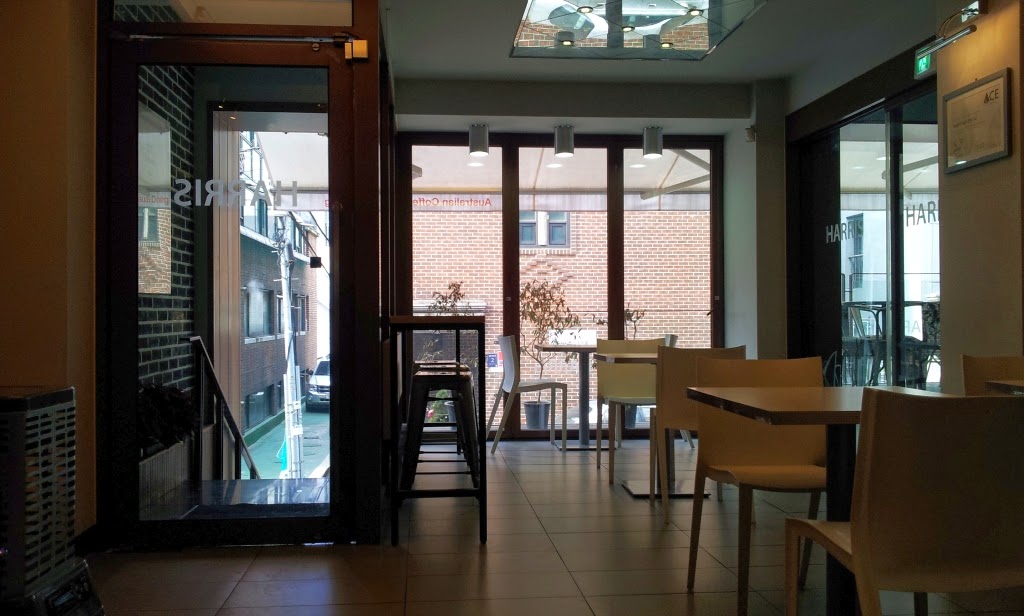 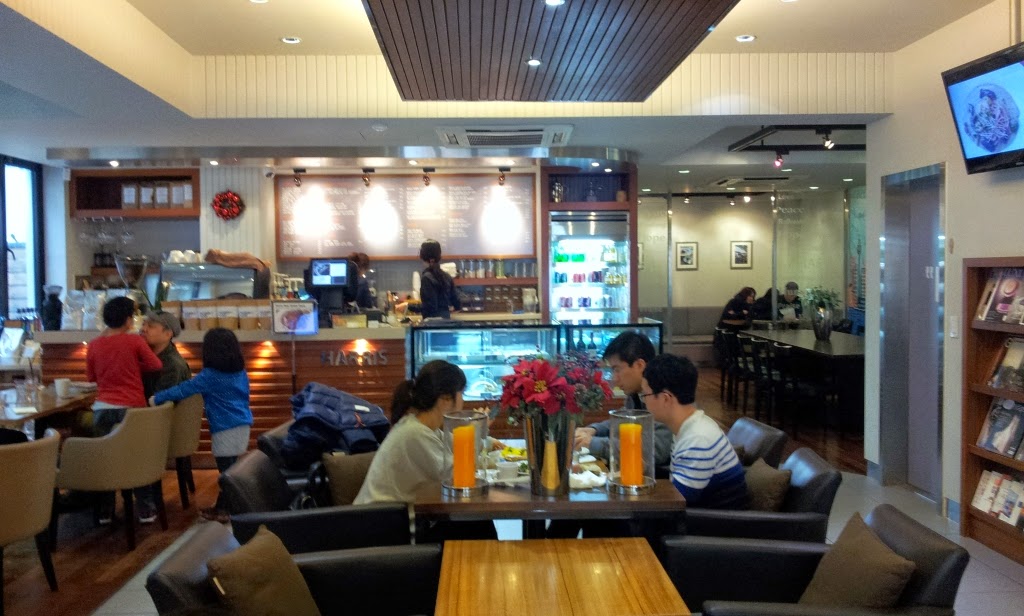 Wendy and I both decided on the "Big Breakfast" with a side of chips. After ordering and paying at the counter, we didn't have to wait very long before the food was rolled out. 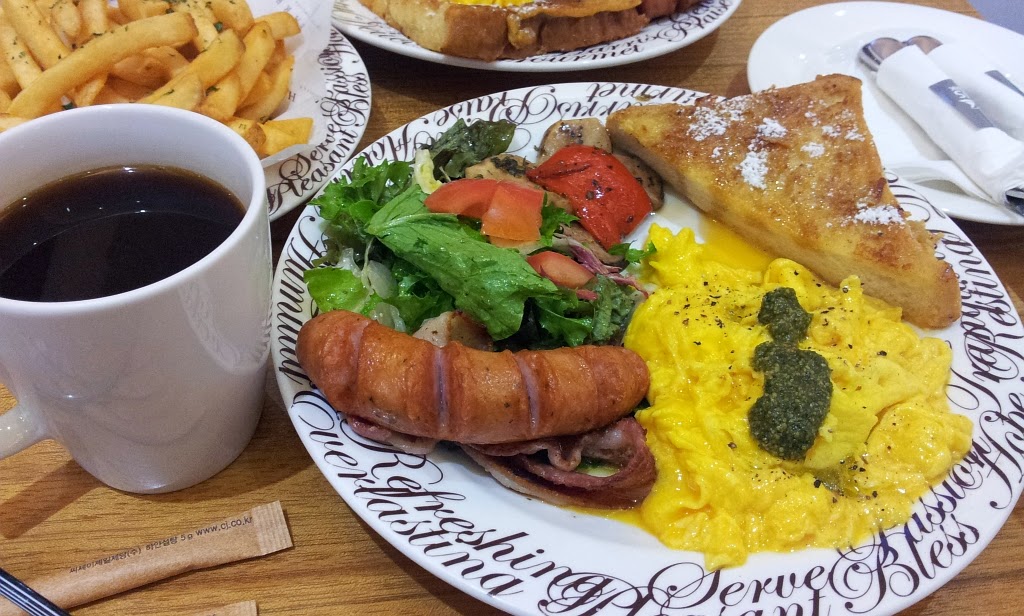 I'm no connoisseur, but the serving size was definitely generous and the food was pretty darn tasty. The scrambled eggs had a delicious, creamy flavour to them and went amazingly well with the pesto. I've yet to find somewhere in Seoul that makes scrambled eggs like Harris does.

A few weeks later, I went back to Harris with a friend who ordered the bread pudding and a chai latte while I ordered the Big Breakfast again.. It came out exactly the same as before. Consistency is good! :D 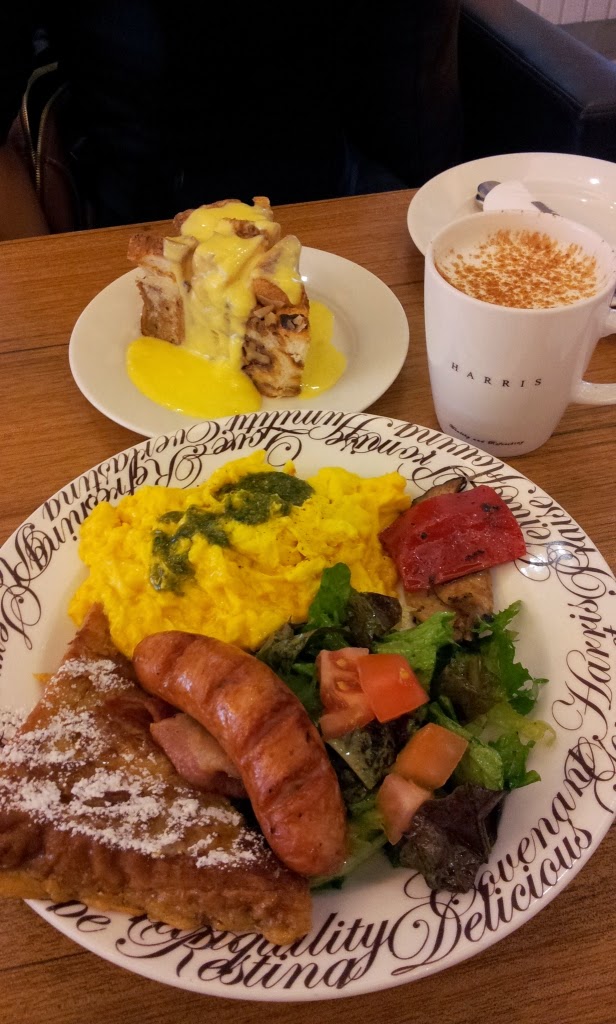 If I remember right, the Big Breakfast on its own was 11,000 won, but you can upgrade to a "set" that comes with an Americano coffee for a grand total of 13,000 won -- pretty good, considering this is Gangnam.

On that note, although the area is still technically Gangnam-gu, Harris is located closer to Sinnonhyeon station on subway line 9 than Gangnam station (line 2).

There are definitely more things on the menu besides their brunch offerings, like pasta, steak, and burgers to name a few, but I've yet to try them out. If they're anything like the brunch dishes though, I'm sure they won't disappoint!

Harris Park Coffee
Hours: 10am - 10:30pm Mon - Fri, 10am - 10pm weekends
Address: 서울시 강남구 역삼동 601-16 (601-16 Yeoksam-dong, Gangnam-gu, Seoul)
Website: http://www.harriskorea.co.kr/
Directions: From Sinnonhyeon Station, exit 4, walk straight and take the second right onto Bongeunsa-ro 4-gil. After a few meters, Harris will be on your left.
OR
From Gangnam station, exit 11, walk straight for about 800 meters until you reach the big intersection with Sinnonhyeon Station exit 5. Turn right and continue straight on until you pass exit 4. Take the second right onto Bongeunsa-ro 4-gil and look out for Harris on your left.
Posted by Uncle Yenny at 2:37 PM