Update 31/07/2015:
Koopet now runs programs on weekends where children can feed, touch, and learn about all the reptiles in the store. The cost is 10,000 per child.
You can also feed tortoises with fresh vegetables for 5,000 won. :)

One night back in autumn, my co-worker and I decided to take a stroll around the neighbourhood where our work building is. ('Cause you know, this is what all normal people do at 11pm on a Friday night, right? Fire Friday, anyone? XD) At that point in time, she hadn't yet been to Brooklyn Burger so we figured we'd head on over for a look-see. The place would be closed, but that was okay.. We could always just stand outside looking in and drooling, like peeping toms in the middle of the night. No shame.

As it turned out, someone was setting up shop just across from Brooklyn Burger and it happened to be a reptile cafe and pet store they were opening. Regrettably, I didn't get any pictures of said lizard with his (or her) fluffy pink bow, but I assure you that it was most awesome and I vowed to come back later once they were done setting up the place.

Fast forward to last weekend, almost 5 months on, when I finally made it back there. I wasn't sure what to expect, but I can say it definitely didn't disappoint. 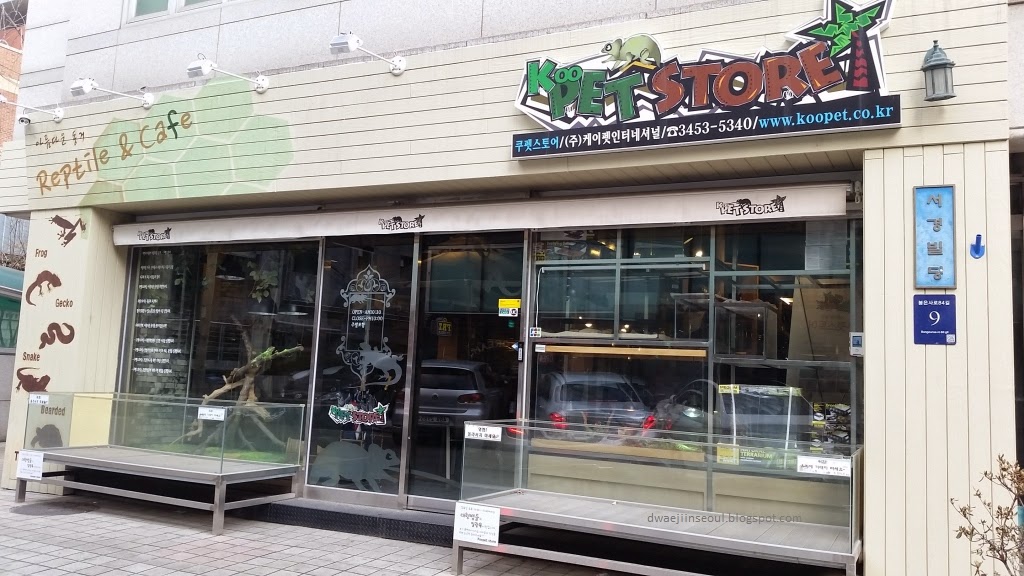 The place seemed to be primarily a pet store selling everything you would need for your own reptilian companion, such as glass tanks, food, sand, and of course the actual reptiles themselves. If you're not in the market for a new pet though, that's okay. You can still buy a drink and wander around looking at the different creatures they have. 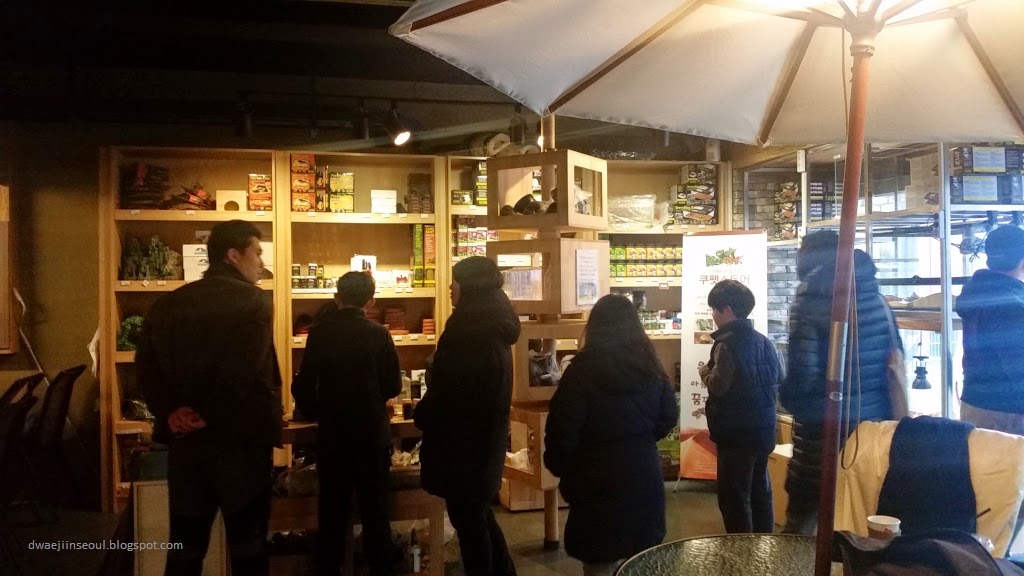 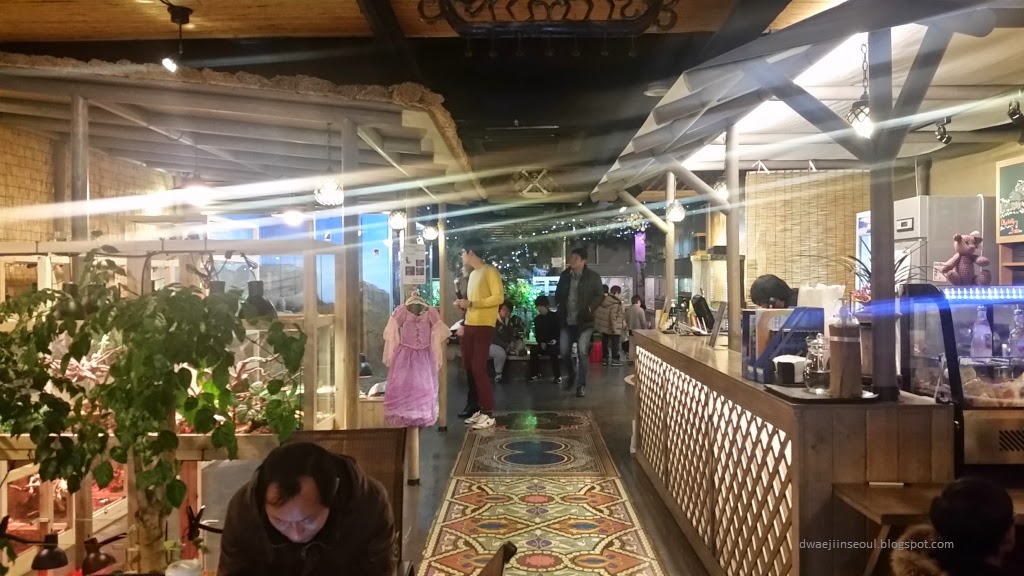 The offerings on the menu were quite simple: basic Americano coffee for 4,500 won and organic tea (camomile, rooibos, peppermint, etc.) for 5,000 won. There were only four or five tables too, which meant the cafe part was quite small. This makes sense though, if their primary business is to sell pets and pet supplies. Plus, once you're inside, chances are you won't be spending much time sitting down and drinking as you'll be too busy roaming around and peering into all the different tanks there.

I was quite surprised at the number of different reptiles they had, but while some tanks had tags on them with the names and prices of the scaly creatures inside, unfortunately others did not. As I'm not a herpetologist, or even in the least bit knowledgeable about reptiles, most of the time I was clueless as to what I was looking at, which was a pity. Still... that didn't stop me from stalking around for a good 30 minutes or so, shamelessly snapping as many pictures as I could: 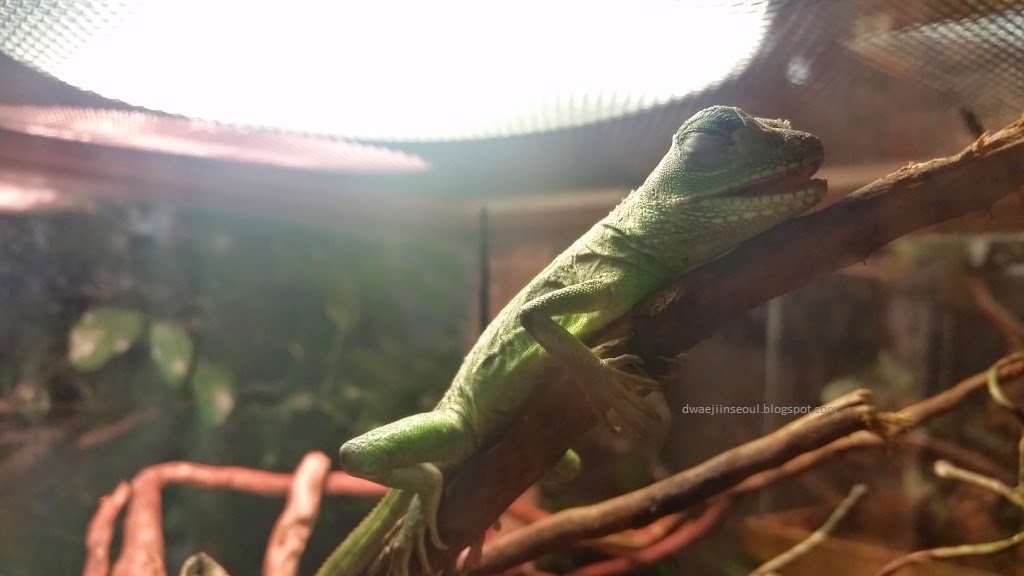 Check out this adorable little guy passed out on his branch. :3 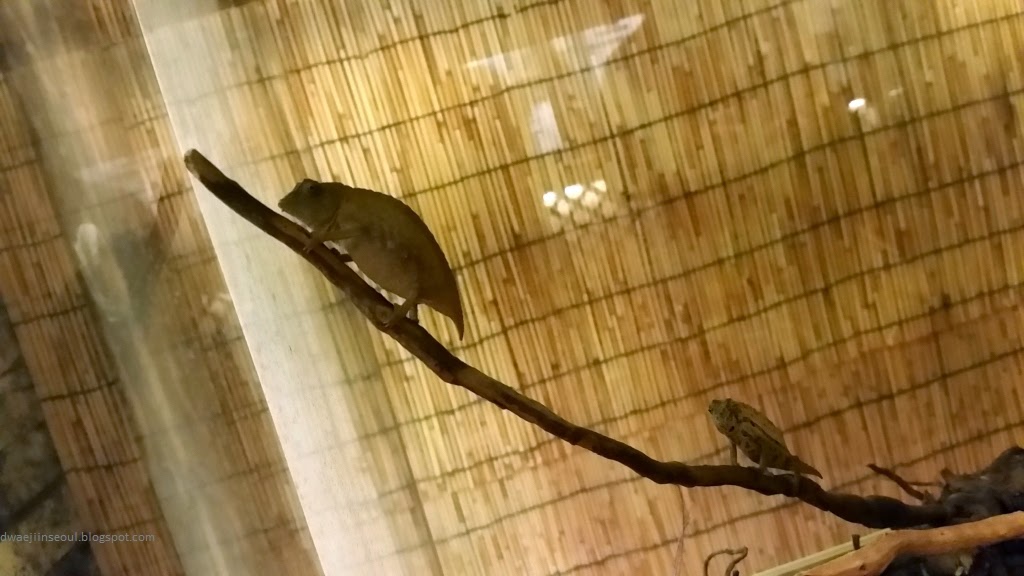 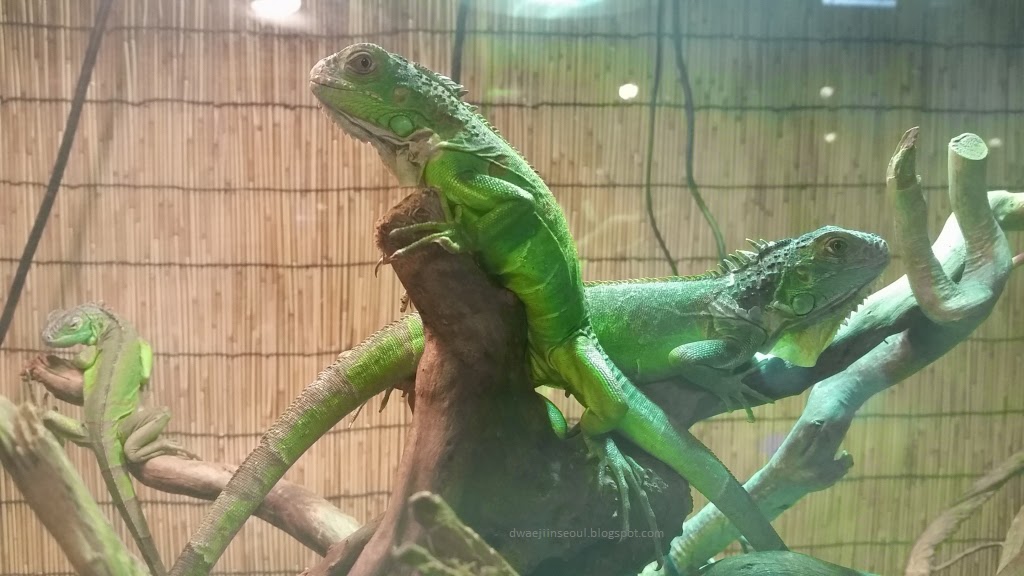 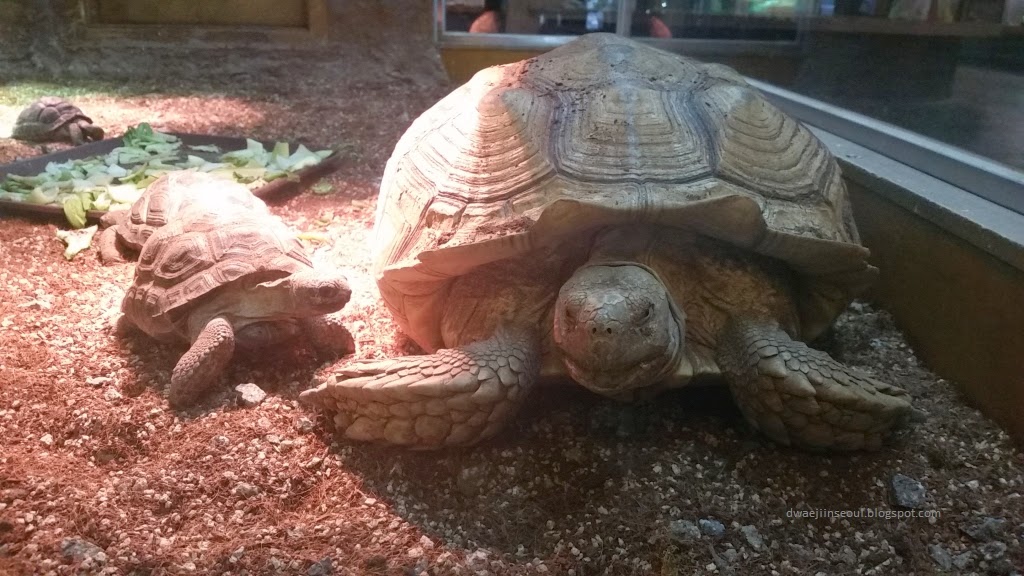 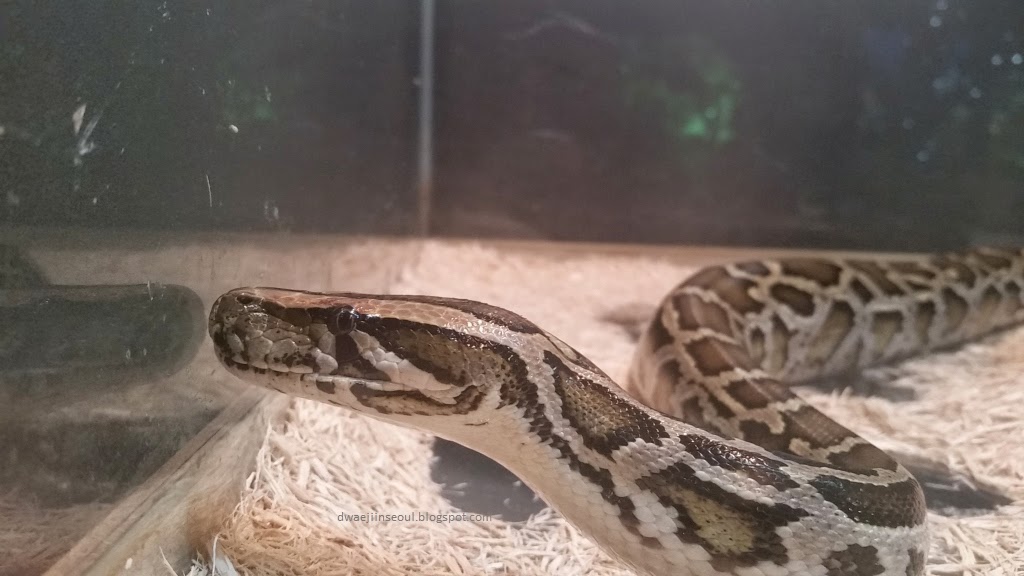 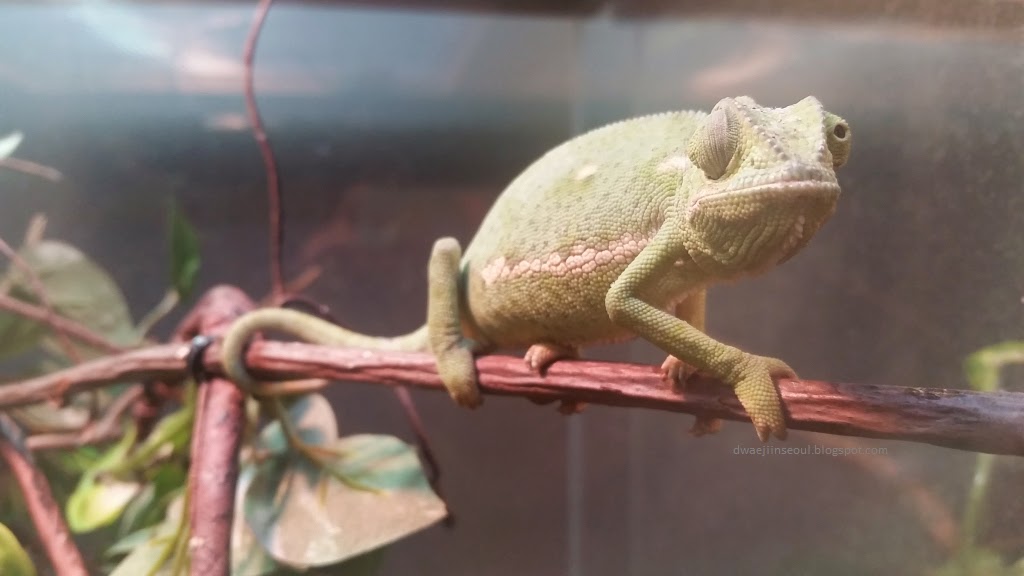 Funky eye action going on right there. Besides their awesome, bulbous eyes, chameleons also have such cute little feet! 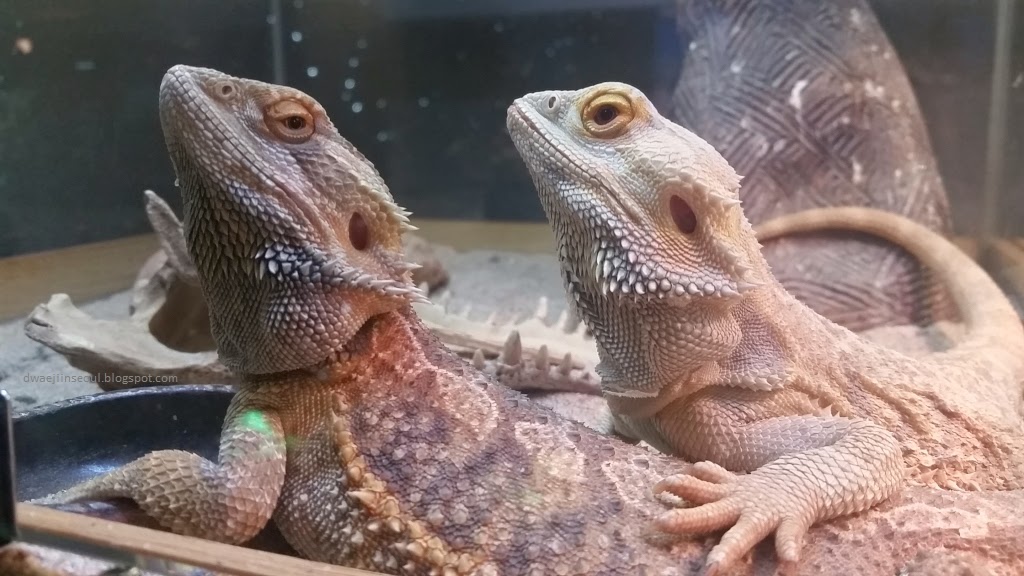 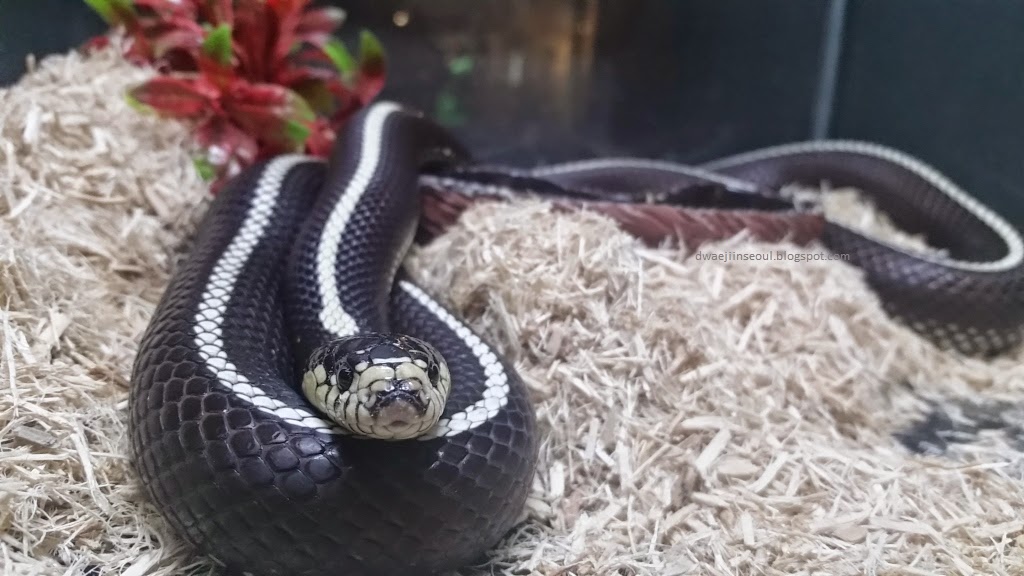 I've never thought of snakes as cute before, but this one was so pretty! :3 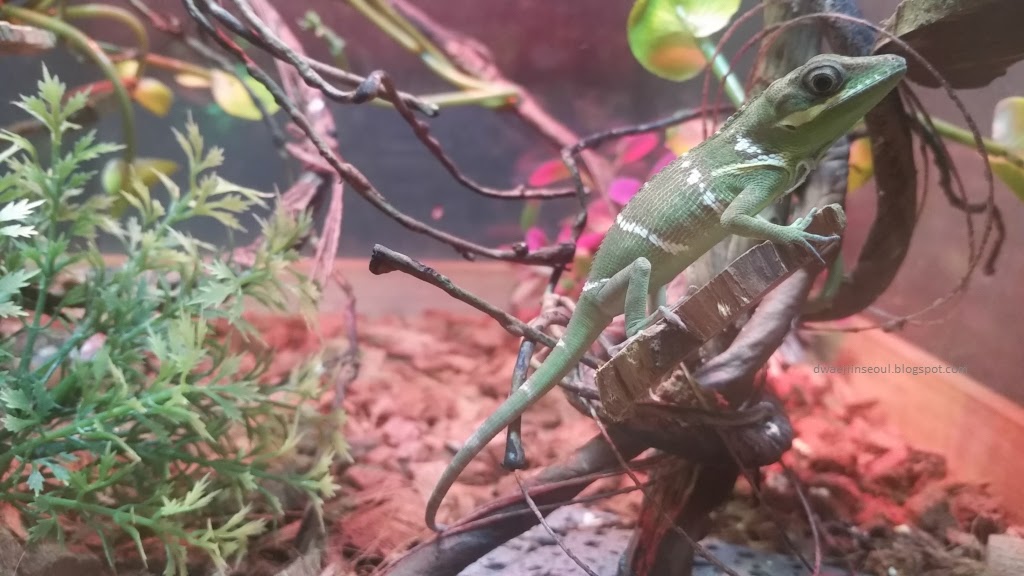 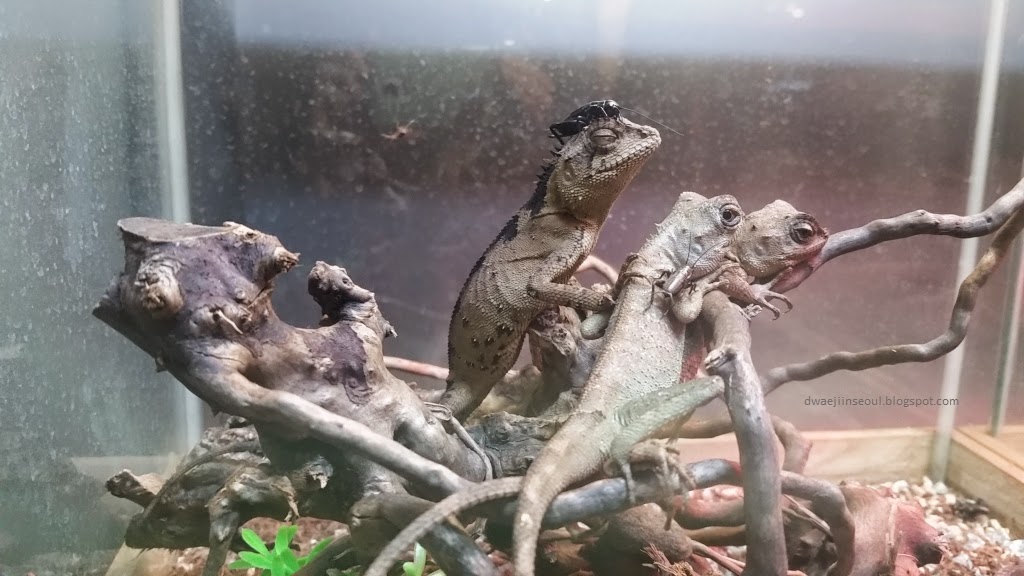 This lizard appears to have found inner peace. He can meditate even with his next meal flaunting it on top of his head. 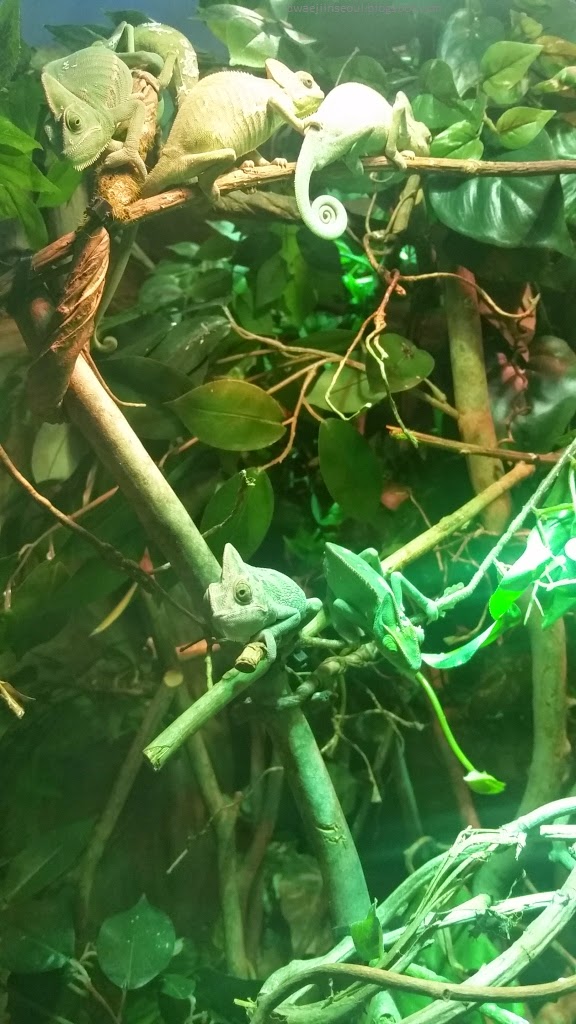 How many chameleons can you spot? :D

The reptiles seemed to be pretty well cared for, what with lots of tree branches to climb around and plenty of live food.. But I felt a bit sorry for some of the bigger ones whose bodies took up pretty much the whole width of the tank, like this guy: 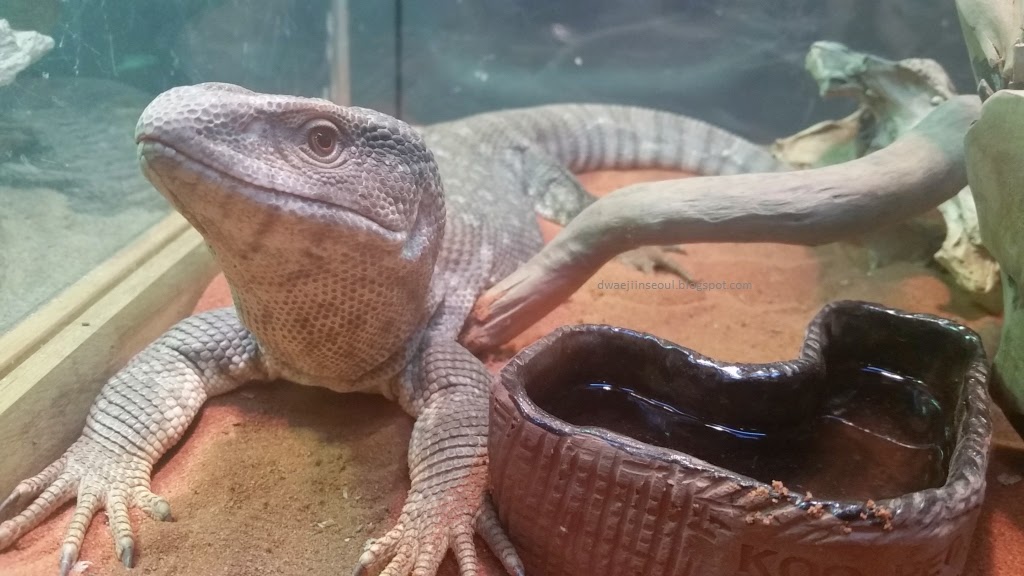 Hopefully someone buys him soon and gives him a nice big space to live in. :3


Apart from scores of tanks to admire, there was also a small enclosure in the middle of the store with several tortoises and you could buy cups of fresh vegies to feed them with: 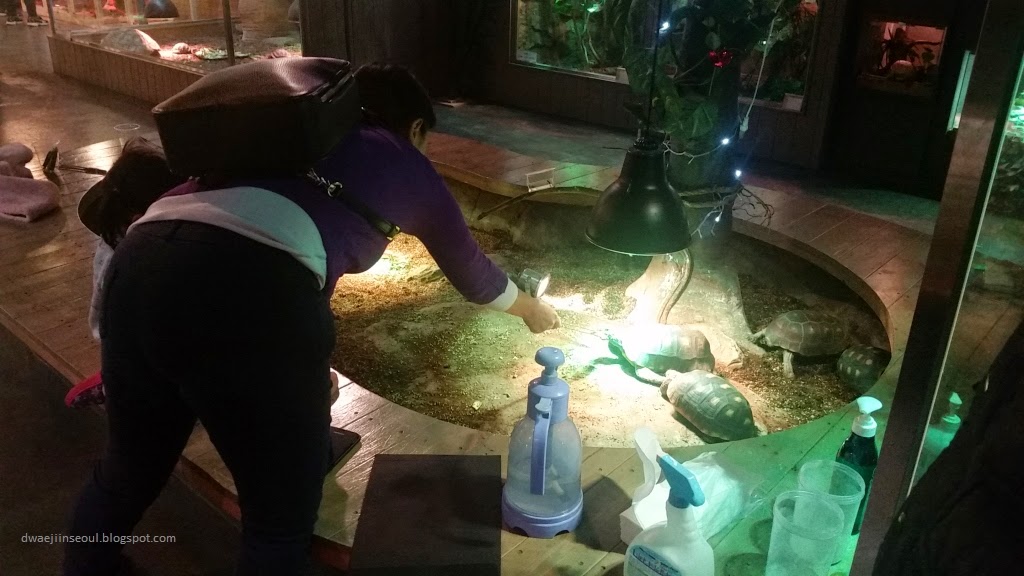 All in all, it was a pretty cool place to visit especially if you're into animals and are tired of the typical dog and cat cafes. Added bonus that you can have lunch or dinner at the scrumptious Brooklyn Burger first before you pop in for a visit. >:D

Koopet Reptile Cafe & Pet Store
Hours: 10:30am - 10pm, closed on Mondays
Address: 서울시 강남구 삼성동 147-7 (147-7 Samseong-dong, Gangnam-gu, Seoul)
Website: http://www.koopet.co.kr
Directions: From Samseong Station exit 5, go straight until you hit the first set of traffic lights (you'll pass Hyundai Department Store on your right).
Cross over to the side with McDonald's and the K-Tower building, then turn right and head straight up the road. Take the fifth left. (Along the way, you'll pass by CALT Mall and Seven Luck Casino on the opposite side).
After you've turned left, take the first right and continue up the street a bit. Koopet will be on your right.
Posted by Uncle Yenny at 3:13 PM