Alright, so this is cheating a bit as this cafe isn't technically in Seoul... but it was so amazing that I simply had to write about it!

Sometime last week, I was doing my usual night owl thing -- mooching on the interwebs at 2am -- when suddenly I came across a picture of a building shaped like a giant red vintage camera. It looked incredible, and when I realised that it was actually a cafe located somewhere in Korea, it instantly became my new goal in life to get myself there.

Dreamy Camera Cafe (or 꿈꾸는 사진기 in Korean, which translates to 'dreaming camera' or 'camera that dreams') is located in Yangpyeong, about 1.5 hours from Seoul. It's kind of in the middle of nowhere, and though this makes journeying there a little harder, especially if you don't have a car, it also works to its advantage. The cafe is surrounded by picturesque mountains, beautiful, rolling scenery, and of course fresh, clean air -- a very welcome change if you're coming from the concrete jungle that is Seoul city. 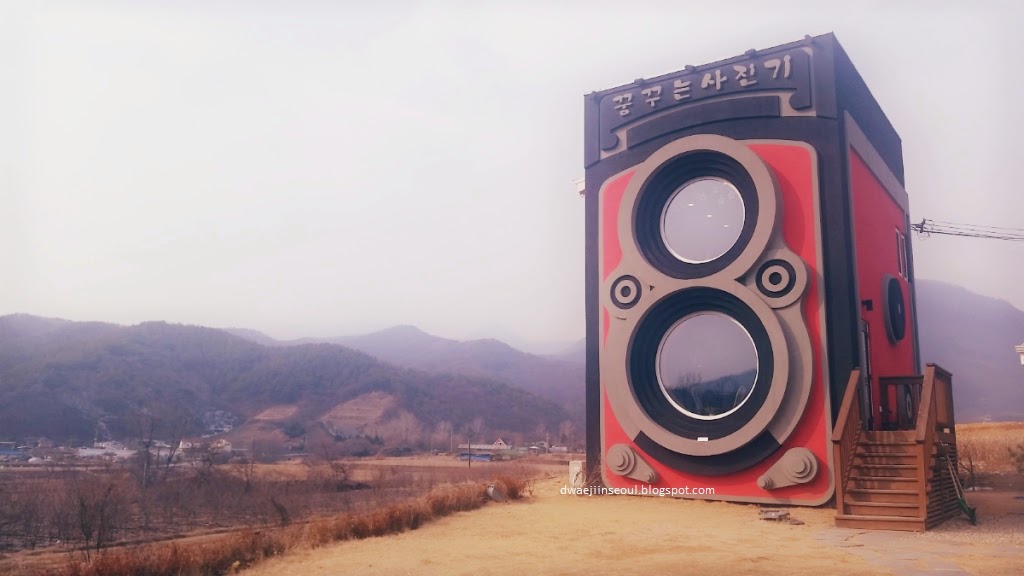 The cafe is run by a husband and wife duo who dreamed of owning a place where other people could come and seek inspiration for their own dreams. As the husband is a helicopter pilot in the Korean army, the cafe is run solely by his wife on weekdays, and they manage it together on weekends. (As an interesting piece of trivia, his wife was also a helicopter pilot in the army, but has since retired. How awesome is that?)

As I rolled up to the location in my taxi, I felt like my breath was being taken away. But not only was the outside of the cafe simply stunning, the inside was also incredible as well. There were shelves lined with an extensive collection of vintage cameras (still in working condition!) and a plethora of more modern, digital cameras too. Couple that with plenty of camera-shaped figurines, trinkets, and toys scattered across the window sills, and you have yourself a photography-lover's dream. 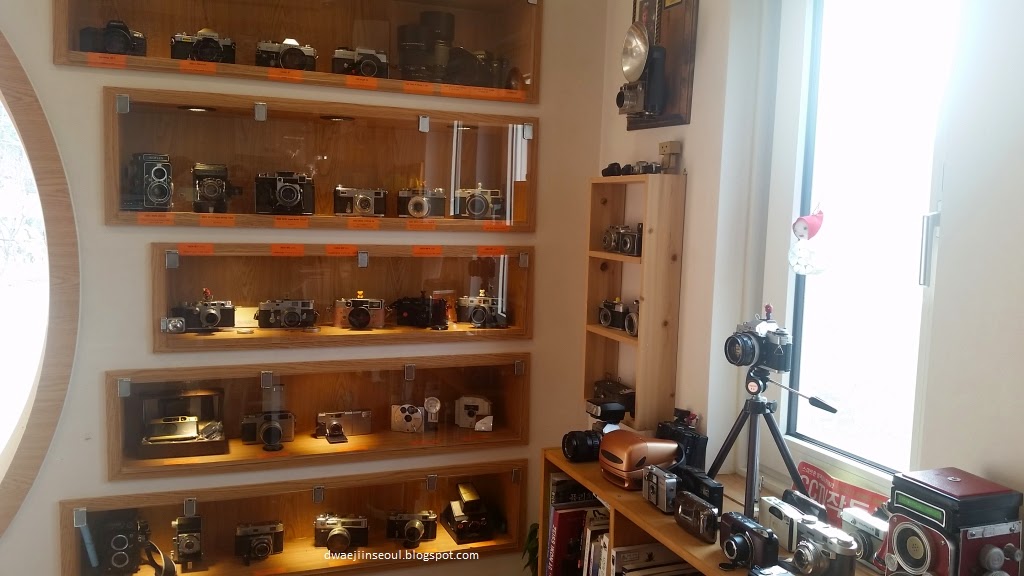 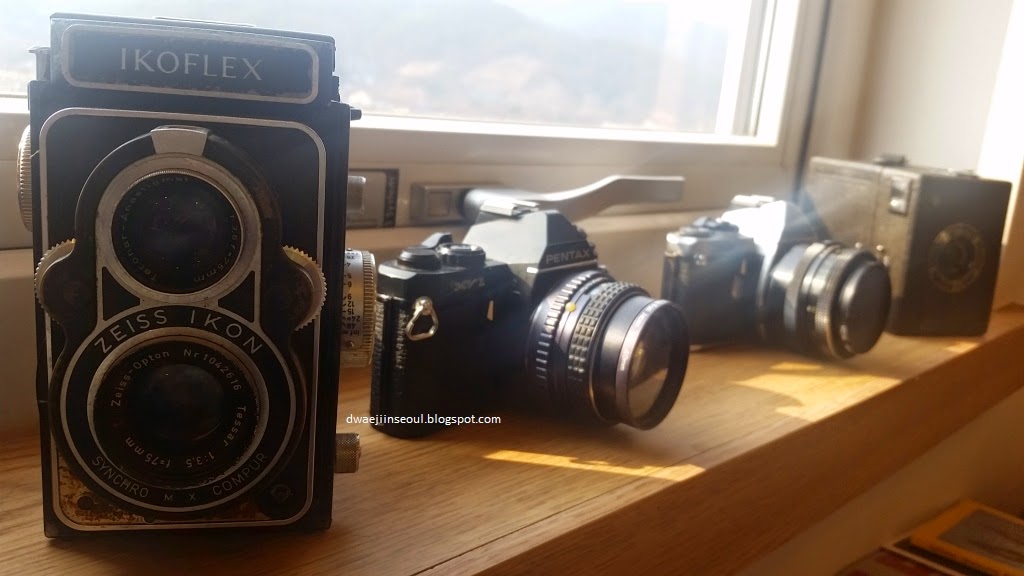 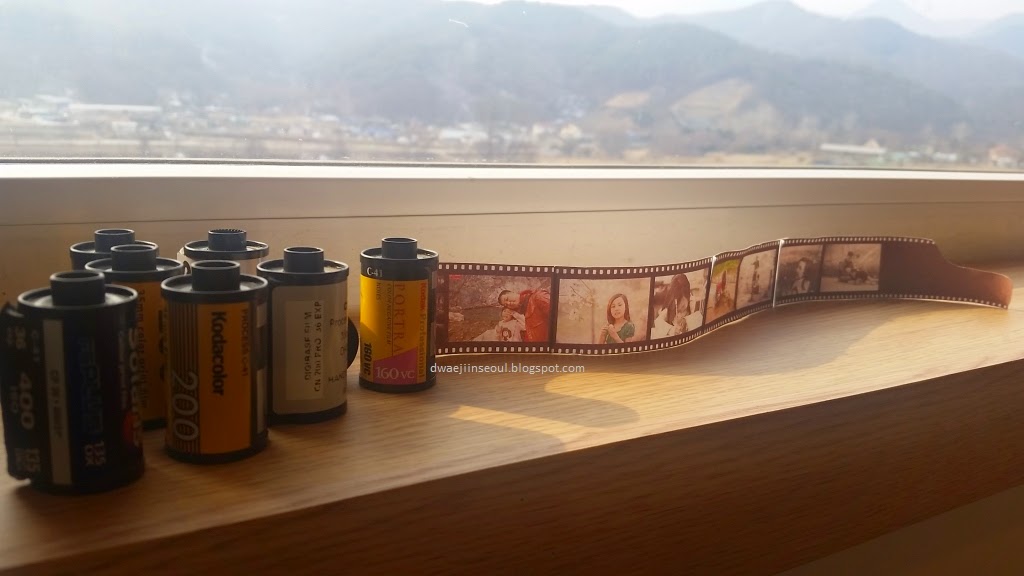 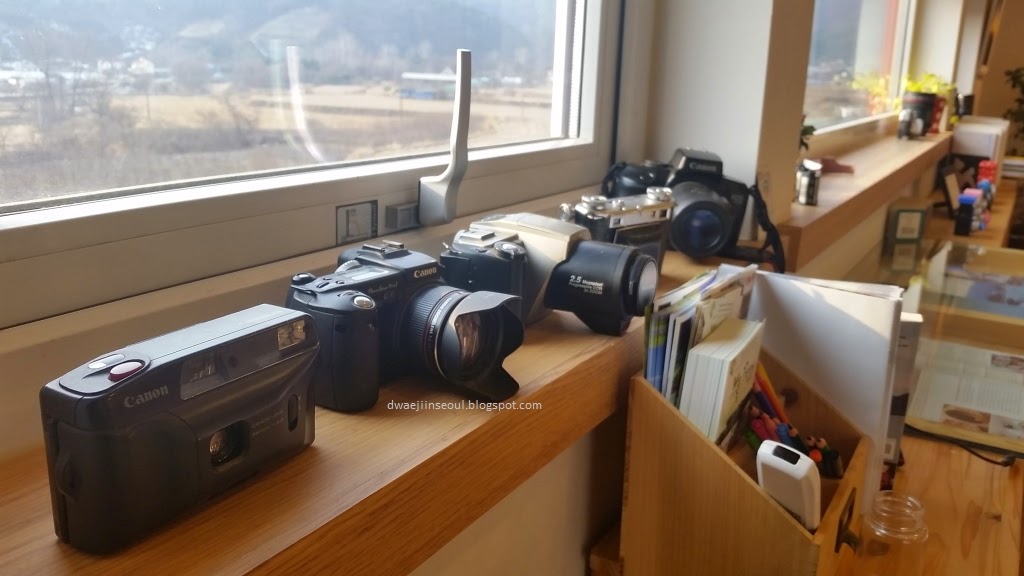 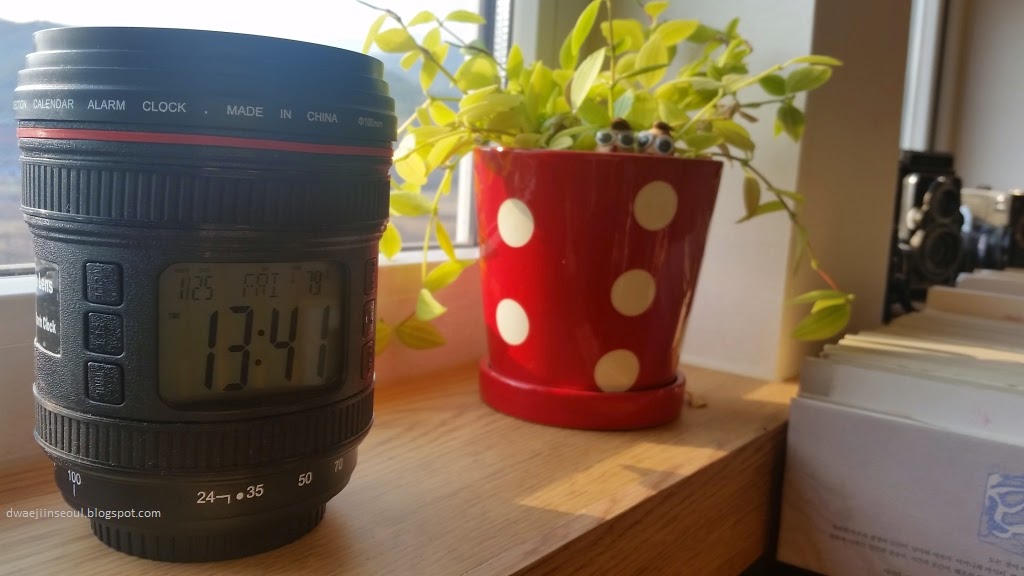 The cafe also had this wonderful, homely air to it. It wasn't a big place, as there was only one table downstairs and four upstairs, but I think this just added to the cosiness of it all. The walls were a plain, light color, the furniture was simple, and there were pictures everywhere of the owners' family and previous guests who had visited. It really felt like being invited into someone's home. As I was there on a Wednesday, I had the pleasure of meeting the wife owner, and she was so kind and friendly, right from the get-go. :3 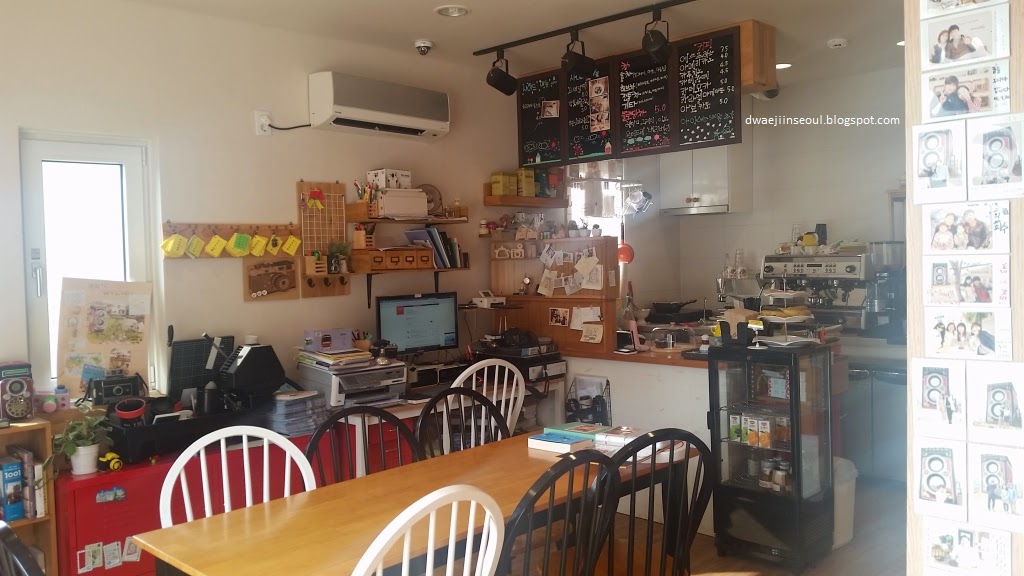 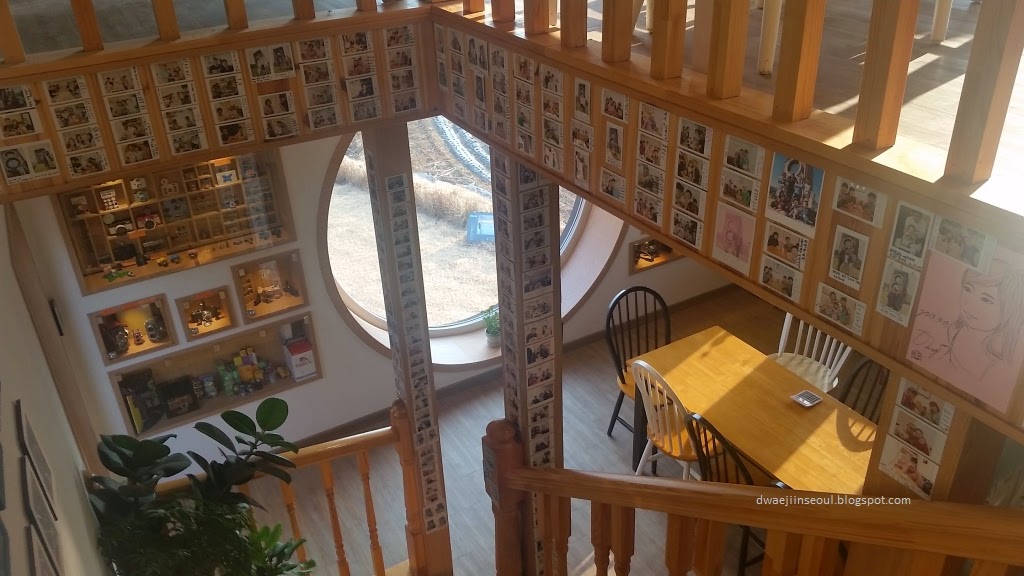 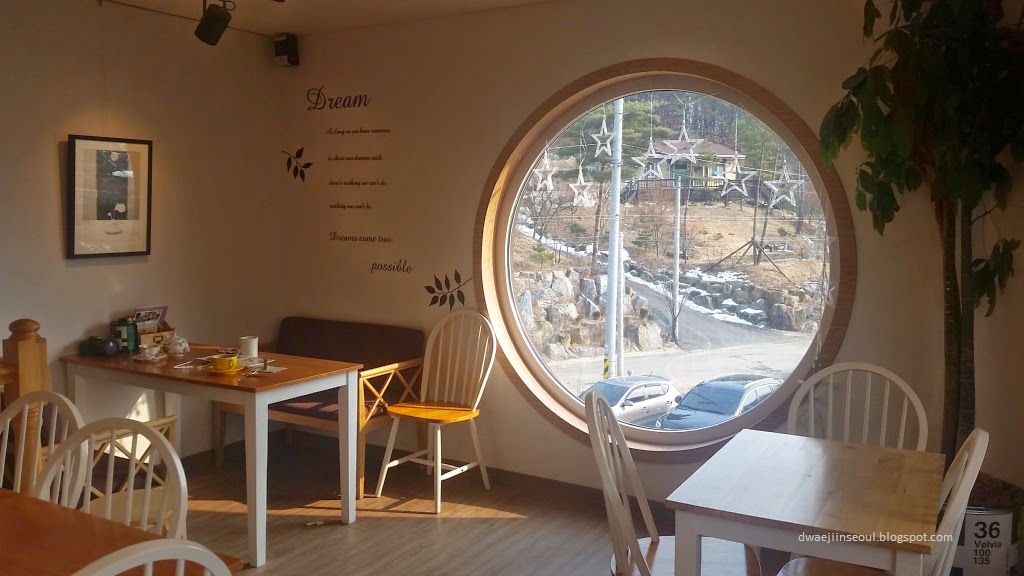 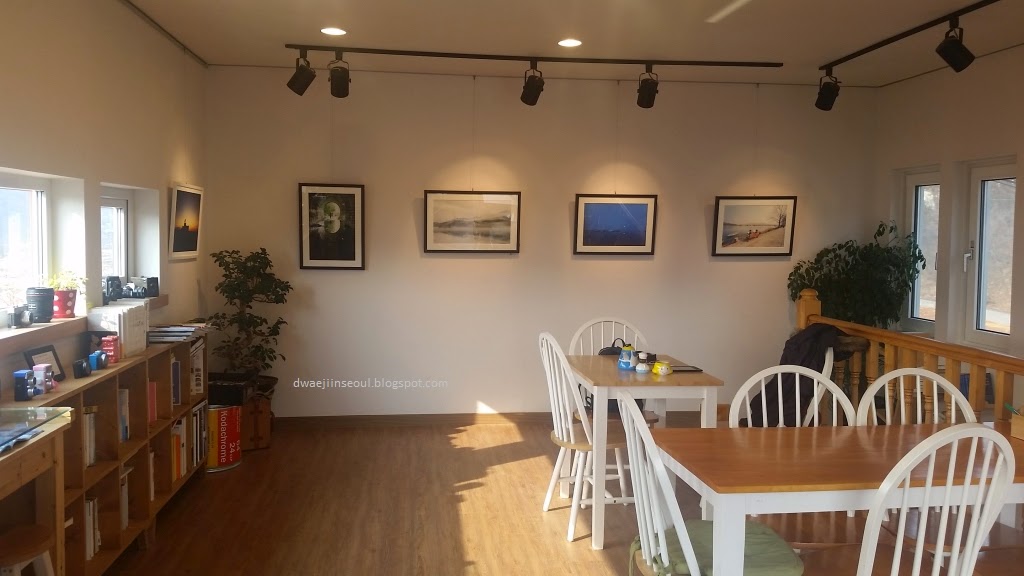 The menu was very reasonably priced, with drinks (coffee, tea, ade, and fruit juice) starting from 3,500 won. Fruit juice was the most expensive (6,000 won) as it's made with real fruit and not just poured from a can or bottle.

In terms of food, there were only snacks on offer -- rice cake, honey bread, kaya toast, chocolate cake, and mini muffins. Unfortunately, I'd skipped lunch as I was rushing to make the train straight after work, so I had to make do with a slice of chocolate cake and a pot of tea. It was really delicious though. Soft and moist with a rich, deep chocolaty flavour, but not too sweet. :3 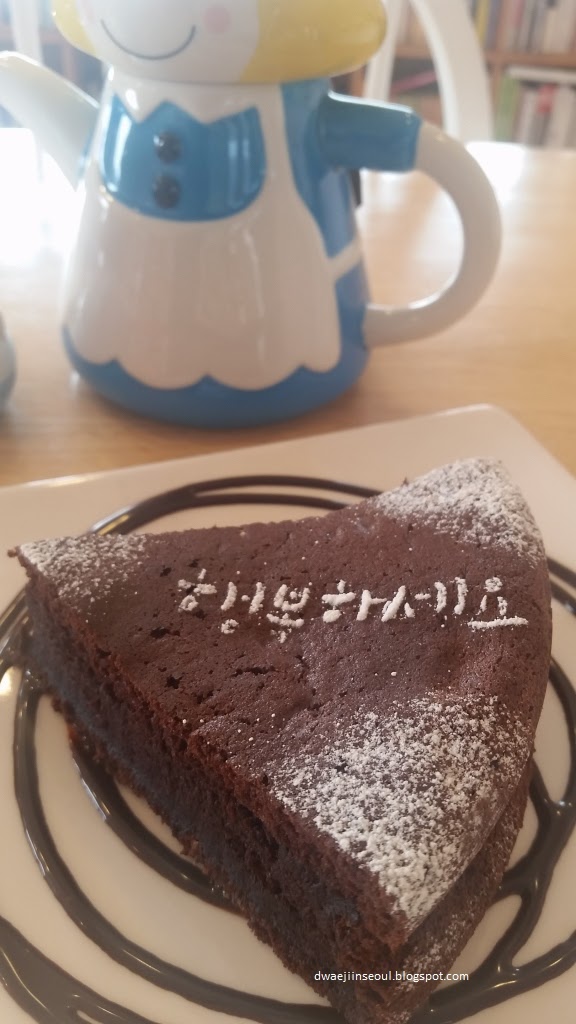 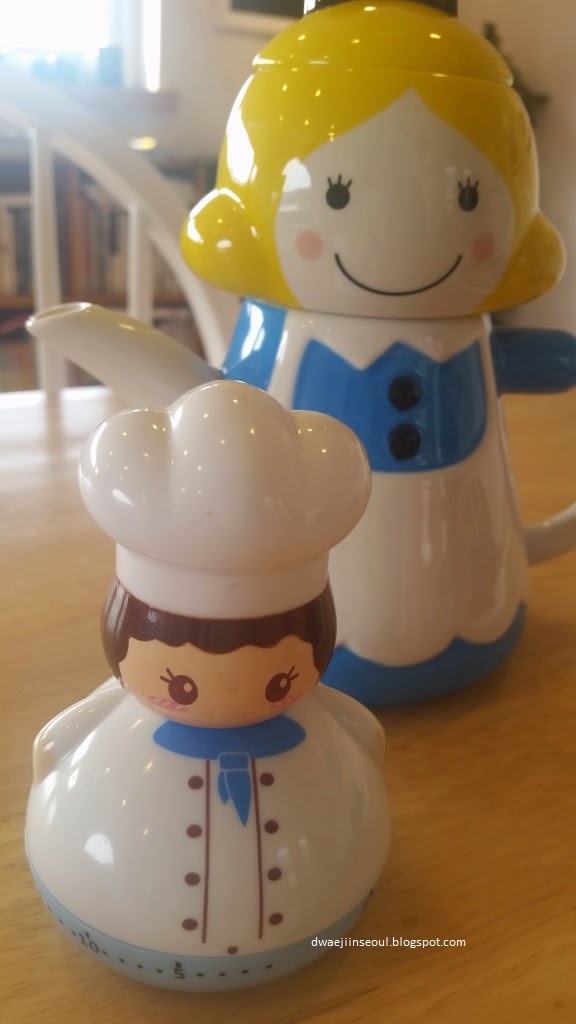 "Be happy", says the gateau au chocolat :3
It came with a cute timer that dinged when the brewing time for the tea was up. 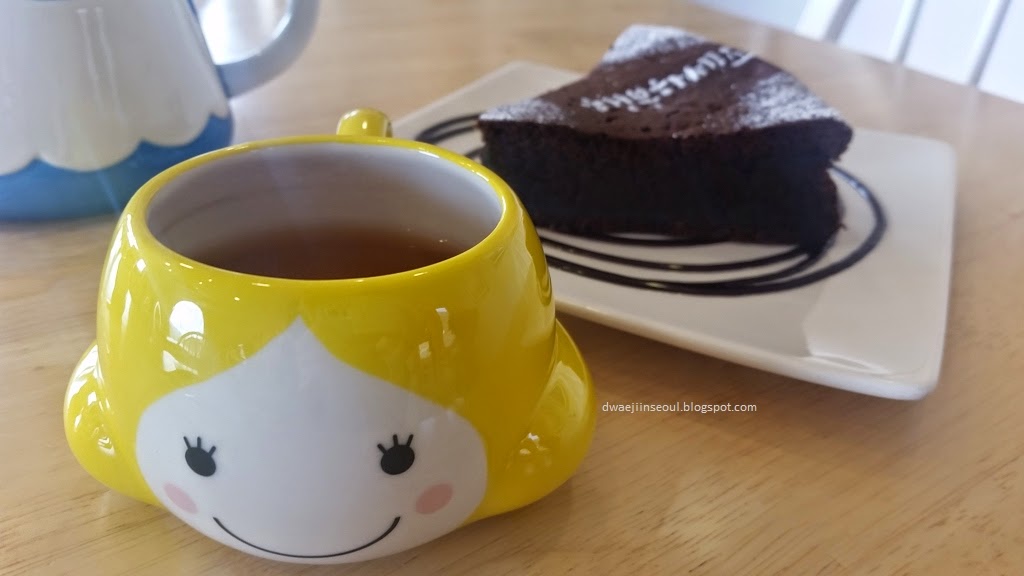 
At one point, the lovely owner approached and explained that she was compiling a guest book of sorts for foreigners who visited. She asked if I would sign it, and also very generously gave me this gorgeous post card, offering to mail it if I wanted to write a message and send it to someone. 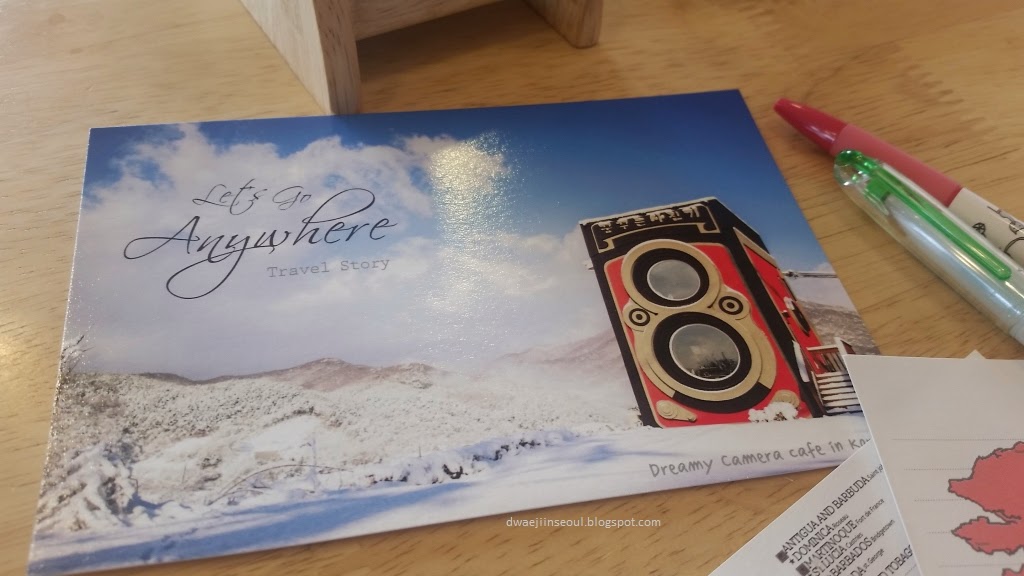 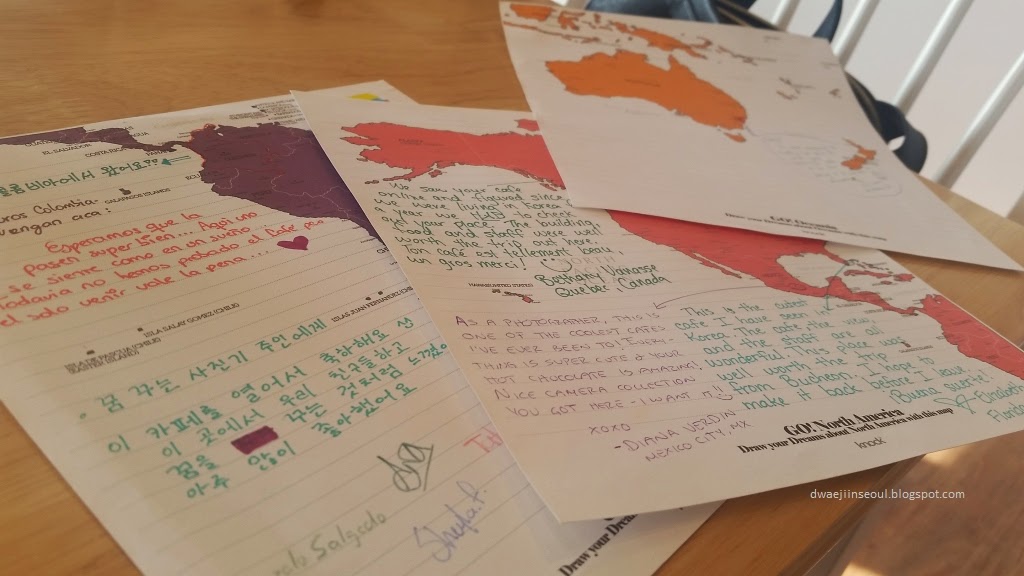 Later on, she brewed me another cup of tea and we had a lovely chat as I waited for my taxi to arrive. I found myself wishing that the taxi would somehow take a wrong turn or get stuck in traffic somewhere, just so I could linger around a bit longer. XD

All in all, it was an amazing day out and I came back to Seoul feeling refreshed and uber happy to have experienced such an wonderful place and met such a kind soul. Though it was a bit of trek to get there, it was well worth it and I hope to visit again one day! :3

Dreamy Camera Cafe
Hours: 11am - 6pm, closed on Tuesdays
Address: 양평군 용문면 중원리 341-13 (341-13 Jungwon-ri, Yongmun-myeon, Yangpyeong)
Website: http://blog.naver.com/pilotgirl / http://www.facebook.com/cafedreamy
Directions: Take the subway to Yongmun station, right at the end of the Jungang line. Come out exit 1 and hop in a taxi. If you show the driver the name of the cafe in Korean, chances are they'll already know how to get there, but it might be a good idea to have the address written down too just in case. When I went, the drive to the cafe cost 10,000 won and the drive back was 9,800 won, taking about 10 minutes each way. :)
Posted by Uncle Yenny at 5:02 PM